Aminah Robinson
COLUMBUS, Ohio -- An Ohio folk artist whose work focused on her childhood neighborhood in Columbus has died.
Columbus Museum of Art Executive Director Nannette Maciejunes said Aminah Robinson died Friday at Ohio State University's Wexner Medical Center, where she had been hospitalized for heart issues. She was 75.
Robinson was born in Columbus and grew up in Poindexter Village, a federal housing project on the city's east side. Poindexter replaced a ramshackle neighborhood called the Blackberry Patch, where several of Robinson's relatives had lived. Characters from these neighborhoods populate her cloth paintings.


Born Brenda, she legally took the name Aminah in 1980 after a holy man gave her the name in Egypt in 1979. A former MacArthur Foundation fellow, her work has been shown in galleries and museums around the world.
Posted by Unknown at 7:25 AM 5 comments:

See the May issue of the journal AEQAI for Sue Ann Painter's review of Peter Waite's exhibition The Cincinnati Series.

http://aeqai.com/main/2015/05/not-your-everyday-sightseeing-tour-of-cincinnati-review-of-peter-waites-the-cincinnati-series/
Posted by Unknown at 8:29 AM 5 comments:

Paul McCarthy and Michael Solway at the Frieze Art Fair 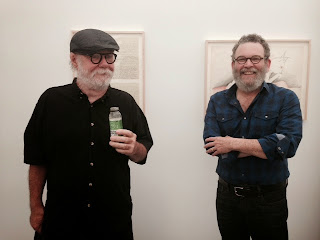 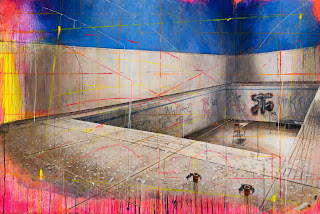 Waite’s painting “Old School Boys Pool” is based on a swimming pool at the old School for Creative and Performing Arts.

In his Cincinnati Series of 29 paintings depicting depopulated city sites, Peter Waite — a Connecticut-based artist — neither celebrates nor dismisses what he sees. Rather, he just tells it like it is. His artwork is at Carl Solway Gallery in the West End through Aug. 1.
If he finds something architecturally interesting to him that is also conventionally beautiful, like the suspension bridge or Union Terminal or downtown’s Isaac M. Wise Temple, he acknowledges and presents it. But if it’s something that interests him because it’s abandoned and decrepit, or it no longer serves its original use, he presents that, too.
While one wouldn’t call his work romantic — it’s too gutsy — it has a fascinating allure. Each acrylic painting is also impressive evidence of his skill and technique, considering the amount of detail included in works that for the most part are not large. He paints on panel rather than canvas.
The Massachusetts-born and -raised Waite has been showing his representational work for decades. In 1975, he received an M.F.A. from the School of the Art Institute of Chicago. He also has worked as a Hollywood scenic artist.
With this project he has emphasized a new, abstracted element in his technique — the use of an undercoat of fluorescent-like colors that sometimes creep or drip through onto the surface. He calls these “21st century primary colors” and feels somewhat ambivalent about that. He also allows for grid marks and laser beam-like “zips” to be evident.
For him, this underscores that representational painting is a work of imagination, rather than just pure reproduction of an exterior reality. It hints at an alternate reality. It also brightens the overall work, since he uses more reserved colors to depict his objects.
Overall, this is the best and most unusual painting exhibit about Cincinnati in quite a while. “I’m chronicling my personal poking around in the city,” Waite said when he was in town recently for the show’s opening. “What struck me about Cincinnati is the 19th century buildings. Some are derelict; some are getting spruced up. There’s really phenomenal architecture here.”
He also likes subterranean spaces.
Several of the best pictures are ghostly and a touch scary, despite his vivid addition of those fluorescent colors and lines.
There are paintings of the boys and girls swimming pools and the gymnasium at the old School for Creative and Performing Arts in the Pendleton District. They are on the building’s top floor.
“Old School Boys Pool” renders the small, empty pool like an excavated pit, angularly wedged into planes of concrete. Along the interior sides are graffiti scrawls — one can see most of a “Pink Floyd” — and a classroom chair has ignobly but carefully been placed in the bottom.
On the surface outside the pool, the ground is littered with what looks like crumbling chips of plaster. There are also two rusty stems jutting out. Did they once hold a diving board? (“Old School Girls Pool” is similar, with the pool presented in a different, mirrored angle to the boys one, but the graffiti is more profane.)
Especially foreboding is “Bank,” which shows the thick bulwark of an open steel door — and the void within — at the old vault of downtown’s Union Trust Building/Bartlett Building, now a hotel. Here, one of those little fluorescent drips has an unexpected effect. Its reddish-pink color, inside that void, looks like a hellish flame.
On the whole, Waite’s work isn’t decorative or picturesque. It can have a contemplative solemnity to it. Even his “Bridge” (the Roebling Suspension Bridge) concentrates on the way a precisely rendered tower rises from the shore like a monolith.
Without people present in them, we are free to experience Waite’s paintings without thinking about how others might respond. “The viewer is out here experiencing what I witnessed,” Waite said. “I often like to travel in winter because there are less people and a more even distribution of light, so it’s not bright and there’s no shadow.”
The Solway Gallery had a show of his work in 1994, and he came to town then. Last year, Michael Solway and wife Angela Jones visited Waite when they went to the Massachusetts Museum of Contemporary Art to see Beck in concert. Also, Waite had sent Solway postcards he had made of images from his series of Paris paintings. That project featured iconic sites like the Eiffel Tower and Arc de Triomphe, but also more idiosyncratic choices like a deserted Metro station.
“I said, ‘Peter, you might think this a stupid idea, but why don’t you come and make a whole series about Cincinnati,’ ” Solway recounted. “He said, ‘Yes, I’m totally ready.’ I wanted Peter to do whatever he was interested in exploring.”
Waite made one trip last September and another in February. Solway and others suggested some spots. But others Waite discovered just by bicycling around.
He’s good at talking his way into unusual and restricted locales, having previously painted corporate boardrooms, prisons, casinos and death chambers.
The old SCPA gym and pools came about through his persuasive powers. “I just walked in and talked to a foreman where there was a construction crew and asked if it would be OK for me to look around. He said sure, so I had the place to myself,” Waite said. (Indianapolis-based Core Redevelopment is converting the building to apartments — the gym will become several units but the pools are being demolished, Core’s John Watson said.)
Waite took reference snapshots and sometimes sketches on site, but in his Connecticut studio he greatly relied on memory. He works fast, without assistants, using mini-rollers and brushes.
“Painting to me is still phenomenal,” Waite said. “You have pigment and you take a brush — an extension of your arm — and create images. You create an illusion. That to me is alchemic.”
PETER WAITE’S THE CINCINNATI SERIES continues at Carl Solway Gallery through Aug. 1. More info: solwaygallery.com.