West Coast Art (Not Laid-Back) A California ‘State of Mind,’ Circa 1970, at Bronx Museum 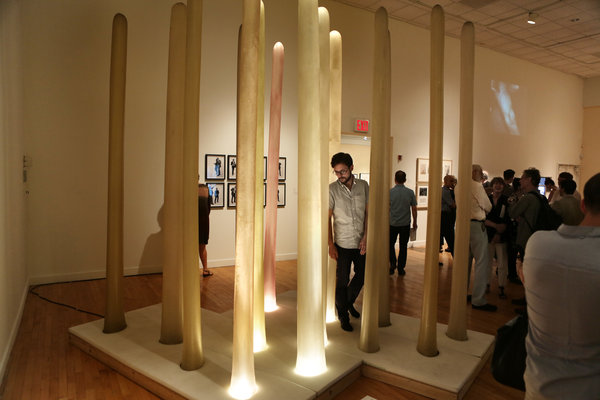 
If you’re even just a little weary of the well-made, no-risk, eye-on-fashion fare in so many Manhattan summer group shows, consider a trip to the Bronx Museum of the Arts, where the exhibition “State of Mind: New California Art Circa 1970” has breezed in from the West Coast, bringing with it a tonic of gawky rawness and moral purpose.

California in the 1970s was one of the weirder spots on the planet, home to radical strains of politics on both the right and left. It was a hub of the nation’s defense industry and a feeder for the Vietnam War, to which disproportionate numbers of Latinos and blacks were consigned. Teachers at the state’s universities were required to take loyalty oaths. Dissidents and deviants of various stripes were under the gun.

At the same time, the country’s most powerful countercultures were born or nurtured there: from the Beats in the 1950s, to the campus Free Speech movement of the early 1960s, to the hippies and Black Panthers later in the decade. Berkeley held one of the first big antiwar protests in 1965. The Watts uprising in South Central Los Angeles happened the same year. So did the first farm labor strikes in what would become the Chicano movement.

What did California art have to do with any of this? A lot. True, you wouldn’t guess this from most history books, which have confined 1960s California art to the high-polish, mostly abstract paintings and sculptures produced by a bunch of guys for the Ferus Gallery, in Los Angeles.

But well before that gallery closed in 1966, a new kind of art — Conceptual art — emerged, which, loosely defined, valued ideas and actions over things. The California version emphasized a commitment to politics a focus on nature and the body, and a tendency to prefer zaniness to braininess.

How this West Coast art developed makes for a fascinating and moving story, though it’s hard to put across in a museum. Much of the work was done in an ad hoc, performance-based mode. It survives, if it survives at all, in funky photographs and videos and bits of ephemera that require some explaining. And if you want explanations, you have to read labels.

Fortunately, in this case, that’s a pleasure.

The curators — Constance M. Lewallen of the Berkeley Art Museum and Karen Moss of the Orange County Museum of Art in Newport Beach — have written short, elucidating comments for almost everything here, about 150 items. Not only do their words bring individual images to life; but they also add up to an absorbing narrative of a place and an era.

In New York, the political content of Conceptual art could be elusive. In California, it was, as often as not, front and center.

Environmentalism was a major issue. In 1969 three young artists — Joe Hawley, Mel Henderson and Alfred Young — used biodegradable dyes to spell “oil” in giant letters on the waters of San Francisco Bay, calling attention to a massive crude-oil spill then devastating the coastline.

Other artists took a quiet approach to environmentalism. Over several years beginning in the 1970s, Helen Mayer Harrison and Newton Harrison, a married couple and teachers at the University of California, Santa Cruz, traveled widely compiling data on global sustainability. They then painstakingly recorded their findings in a grand, handwritten and painted volume called “The Book of the Lagoons,” which sits in this exhibition’s first gallery, its pages waiting to be turned.

A number of Bay Area artists — Mr. Henderson was one — were involved, as performers or aggressive documenters, in the antiwar movement. In Los Angeles, black and Latino artists targeted racism. The Conceptual art collective Asco — Harry Gamboa Jr., Willie Herrón III, Gronk (Glugio Nicandro) and Patssi Valdez were its primary members — staged elaborate, costumed guerrilla performances, the equivalent of living murals on downtown streets and freeway medians. Even in photographs, their visual impact comes through.

And California Conceptualism was particularly rich in experimental art by women. Starting in 1970, Bonnie Sherk, an East Coast transplant, took on a series of low-paying real-life jobs — waitress, short-order cook — tacitly treating each as an extended study about labor and female identity. Two years later, Linda Mary Montano gave identity an interspecies twist. Dressed in feathered wings and a high school prom gown, she took to the San Francisco streets as Chicken Woman, a character at once human and animal, clown and angel, transcendental and absurd.

The human body keeps turning up — vulnerable, gross, distressed, embattled — in the West Coast Conceptualism, and sometimes in an atmosphere of stress or danger. The danger was real when Chris Burden had a friend shoot him in the arm with a rifle, but subtler in a 1973 performance by Barbara T. Smith, in which the artist, nude and alone, received visitors one by one, inviting interaction, no prohibitions imposed.

By contrast, the sight of the Dutch-born artist Bas Jan Ader rolling off a bungalow roof in a 1970 video has the goofy air of a Buster Keaton stunt. It’s a reminder of a wide comedic streak in California Conceptualism, though in this case there’s a dark flip side. Ader’s courting of risk as art led him, in 1975, to set out across the Atlantic in a small boat. He vanished at some point en route. He was 33.

The cinematic flavor of his brief career, with its mysterious fade, has made him a romantic hero. Other artists may have been inspired by California’s movie industry to create stagelike installations. In 1973 the filmmaker and digital art pioneer Lynn Hershman transformed a room in a San Francisco transient hotel into an environment dramatizing the lives of two fictional women. So detailed were the results, right down to two wigged mannequins lying in the bed, that a tenant called the police, and the work had to be dismantled.

Two years earlier, in Hollywood, Allen Ruppersberg opened a hotel as a short-term art project. Of its several rentable rooms, one was furnished with cutout figures of Mr. Ruppersberg in various guises: biker, cowboy, freak. From a New York perspective, the project’s wacky humor might have been viewed as a California thing. So might the spiritual content of the deeply serious “Levitation,” a 1970 performance by Terry Fox (1943-2008), in which the artist, who had Hodgkin’s disease, lay for hours on a mound of earth trying to will himself into an out-of-body state.

Now, after decades of AIDS, “Levitation” makes perfect sense anywhere. So, in more global-minded American culture, does the witty, Zen-tinged art of Paul Kos, Fox’s Bay Area colleague and friend, who finesses Conceptualism’s art-as-process ethic by placing eight boom microphones around a block of ice for a piece called “The Sound of Ice Melting.”

Finally, the artist Tom Marioni, a catalytic figure in San Francisco in the 1960s and ’70s and the creator of the Museum of Conceptual Art, brings us from past into present. His signature work, a participatory bash called “The Act of Drinking Beer With Friends Is the Highest Form of Art,” which had its debut in 1970 and is regularly revived, is basically an example of the trend to turn social interactions into art — “relational aesthetics” before the fact.

In a good, terse essay in the catalog, the art historian Julia Bryan-Wilson points to several younger artists — Ryan Trecartin, Kalup Linzy, Sharon Hayes — who, Californians or not, seem heirs to a West Coast Conceptualist groove. I would add others to the mix, like Tania Bruguera, Paul Chan and Rick Lowe. And, of course, California is constantly producing fresh candidates of its own.

A single profile is hard to define, but you can point to shared links: an investment in social agency, a focus on mercurial identity, an appetite for ideas and an appetite for art that has reasons for existing beyond itself. Their work is meant to wake us up. So is the circa 1970 art in “State of Mind.” If we’re willing to do some looking, reading and thinking, it can.