Excerpt from the article:

ELIZABETH DEE Another sculptor, Joel Otterson made a splash in the East Village in the 1980s, but left for Los Angeles and has been missed since. So it’s great to have major work by him both in the Whitney Biennial and at Elizabeth Dee. He can be wonderfully, campily funny. His “Coffee Table Museum,” from 1989, is a precision-tooled kaffeeklatsch on wheels, a parade float of demitasse cups, sugar bowls, creamers. But he’s also deep. “Divine Intervention,” with two human skeletons cast in blood-red glass hovering over a 1960s jukebox, is a heart-stopper: a memorial to a musician friend who died of AIDS, and whose ashes, in a heart-shaped urn, are set among racks of vintage 45s. 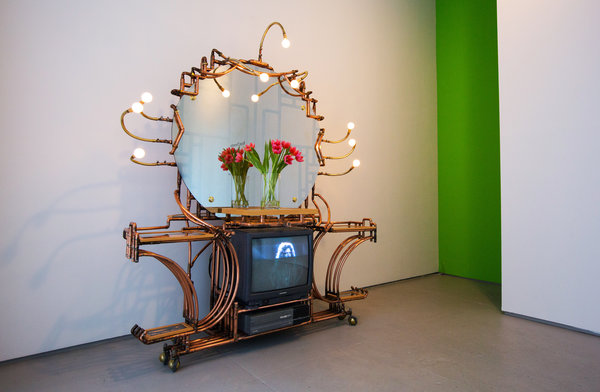